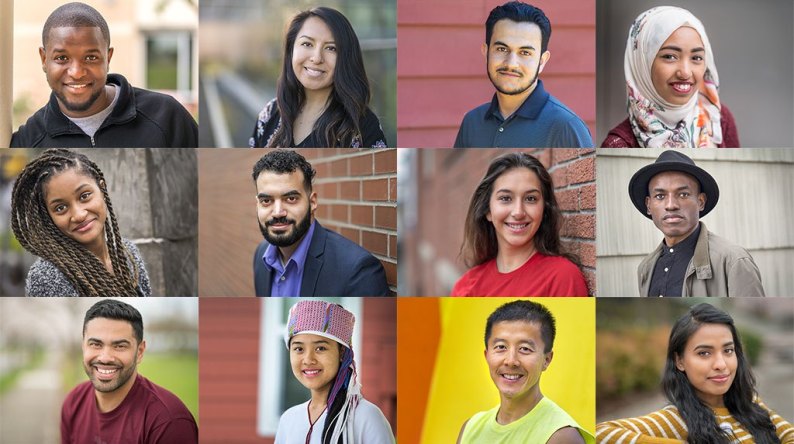 The PDX Art Program is deeply honored to present a spirited new portrait and narrative-based exhibition designed specifically for Portland International Airport titled There is a Land Over the Ocean  from The Immigrant Story, a volunteer-led nonprofit organization based in Portland, Oregon founded by Sankar Raman.

The title of the exhibition refers to the moment when, after traveling over seemingly endless ocean expanses, the passengers in the stories see their final destination, a welcoming place to call home. There is a Land Over the Ocean is on view pre-security in PDX’s International Arrivals Corridor within North Baggage Claim through January of 2023. The Immigrant Story provides a platform for underrepresented voices of immigrants by documenting, publishing, and exhibiting their personal stories.This informative thought-provoking exhibition at PDX highlights ten outstanding Oregonians and their paths to finding home and community in the United States of America. When The Immigrant Story interviews immigrants and refugees, they often ask about their first memory of stepping onto American soil. For many of those resettling in the area, Portland International Airport (PDX) served as their Ellis Island, a port of entry for a new beginning. Following difficult goodbyes to family members and friends, immigrants and refugees often travel for days—sometimes weeks—before arriving in the United States.

Using a narrative style that emphasizes the voices and perspectives of each storyteller, The Immigrant Story produces short-form accounts capturing both the obstacles and the bold inspiration of immigrating to a new country. The Immigrant Story hopes that the exhibition’s location in PDX’s International Terminal will provide a sense of familiarity for new arrivals. May these welcoming faces remind all travelers that Portlanders embrace multiculturalism and that our aim is to make everyone in our community feel right at home.

Something to Be Proud of  |  Felix Songolo, Portland, OR

Felix Songolo came to the United States as a 4-year-old refugee from the war-torn Democratic Republic of Congo. Growing up African in a white environment was tough but, in eighth grade, he decided that being different was an asset after all. He began studying hard, earned a full scholarship to Georgetown University and hopes to work for human rights in Africa. “I don’t want (other people) to have to worry about war and death,” he says. “I want (them) to have the option to stay in their home countries.”

Embrace All Your Cultures  |  Inés Voglar, Portland, OR

Born in Venezuela, Inés Voglar plays assistant principal second violin in the Oregon Symphony Orchestra.  She credits her teachers with giving her the courage to do what she loves most and strives to be an excellent teacher herself. Reflecting on her life as a multicultural person, she says, “You have to be open-minded and figure out the way to embrace all the cultures around you.” Born in Vietnam during the fall of Saigon in 1975, Vu Nguyen emigrated to the United States with his mother and siblings. His dad was sent to a labor camp. Vu did not see him again for 15 years. As a child, he delivered newspapers to help his mom, who worked while attending community college. He’s now married with a family of his own and works as an engineer. “I like to think of it as sometimes early in life, if you go through hardships, it will only make you stronger,” Vu says. A Resilient Daughter of the Arab Spring  |  Rama Yousef, Portland, OR

Rama Yousef grew up in the Syrian capital of Damascus. When the bombs came too close to her neighborhood, her parents sent her to the United States to live with her older married sister. Now a college student with a full scholarship, her plans to be a dentist. “It’s what you put in this world (that matters),” she says. “It is about what you are and what you give to this world.” Desert to Oregon, a Paintbrush in Hand  |  Hussein Al-Baiaty, Beaverton, OR

Hussein Al-Baiaty’s family fled the war in Iraq, eventually resettling in the United States. Even in the refugee camp where they spent several years, his father used old tents as canvases for his artwork. Inspired by his father, Al-Baiaty has started his own screen-printing business, The Printory, where he creates custom clothing and donates to local nonprofits that support refugees. “The biggest success for me is that this business has truly shaped me into the man who I hope… to be,” he says. We Are an Asset to Our Society  |  Maria Garcia, Portland, OR

After coming to the United States from Mexico as a young adult, Maria Garcia wanted to share her traditional culture and food in her new home, so she opened Revolución Coffee House in Portland. “We need to be proud of who we are—our accents and our features,” she says. “We are an asset to our society.” Come Up and Speak Up  |  Hameda Dil Mohamed, Portland, OR

Wearing a crisp business suit and foregoing the traditional Muslim hijab, Hameda Dil Mohamed is a Rohingya from Burma by way of Malaysia. A recent college graduate fluent in five languages, she speaks out at rallies and conducts workshops on the story of her people. “I want to be an advocate for my community,” she says. A Heart in the Right Place  |  Abel Getachew, Portland, OR

Ever since grade school, Abel Getachew has known what he wanted to do with his life: perform heart surgery for those in need. Born in Ethiopia, he came to the United States in the eighth grade, learned English on the soccer field, got a perfect 4.0 grade point average in high school and has already had his name included on a published scientific paper. Hope for a New Generation  |  Jenny Munezero, Beaverton, OR

Jenny Munezero was 2 months old the night the soldiers attacked. She was the only one left alive in her family’s house in Burundi. Reunited with her parents at a refugee camp in Tanzania, she immigrated to the United States as a young teenager and has earned a degree in business management from Portland State University. Now a newlywed, she plans to start a nonprofit to educate women from Burundi about women’s health issues. To See the World Outside  |  Naw Bi Tha Aye La, Portland, OR

Naw Bi was born in a refugee camp on the Thai-Myanmar border. Her parents, members of the Karen ethnic group, fled attacks from the Burmese Army. When she came to the United States at age 11, she said she “put on a brave face” and walked into her first school classroom, unable to speak English. Within a year, she moved on to regular classes. Now a college student, she credits the support of her family and her church for her success.

For more information about The Immigrant Story and to learn more about these and many other personal stories please visit: *Feature image by Sankar Raman, Founder & Board President of The Immigrant Story.